The synagogue’s destruction was captured by the amateur photographer Erich Koch (1914–1986) from Siegen. Koch, a businessman by profession, arrived at the scene when the building was already in flames. The rights for the photo series with 26 shots are held by the Siegerländer Heimat- und Geschichtsverein (the Siegerland society of local history). The Aktives Museum association presented the pictures to the public for the first time on November 9, 2018. 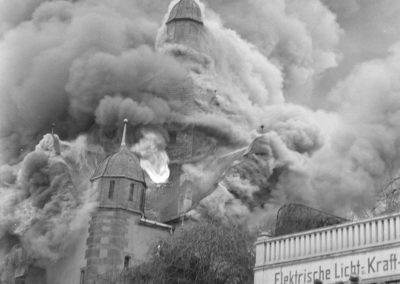 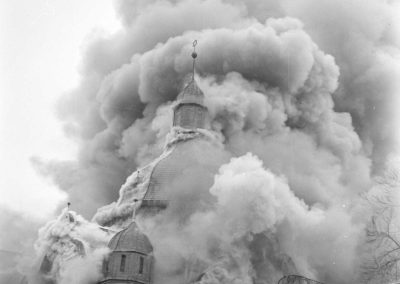 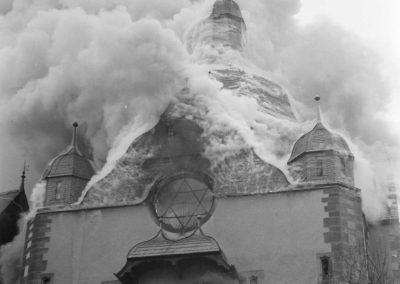 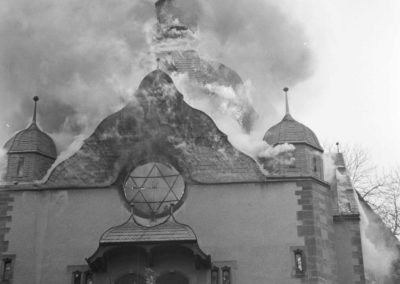 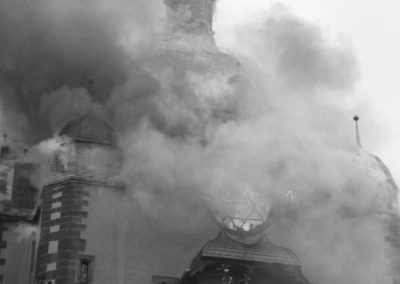 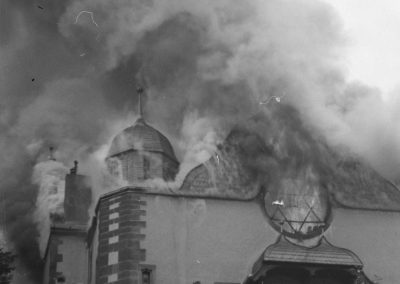 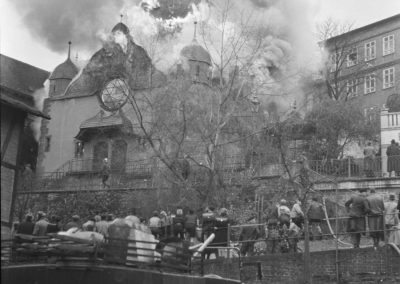 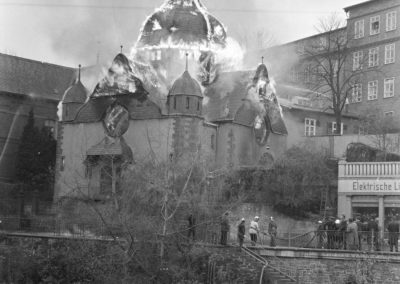 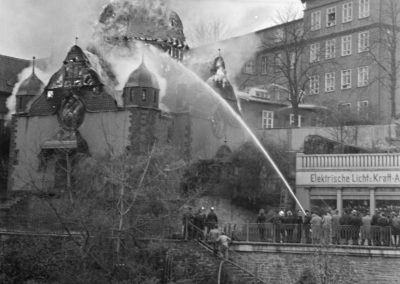 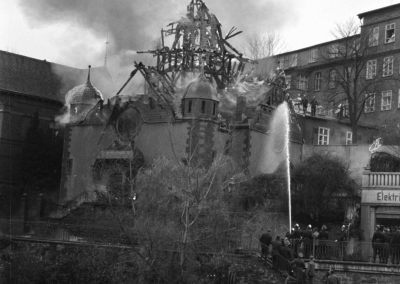 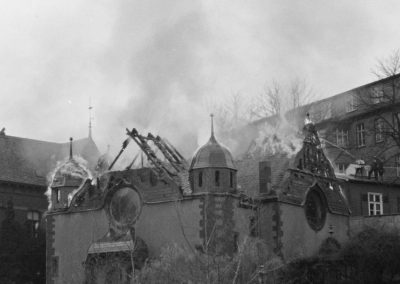 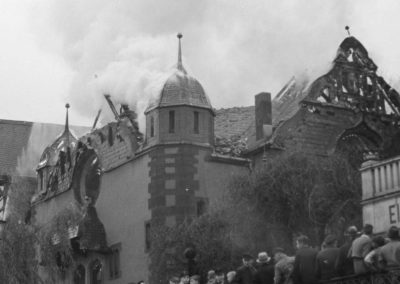 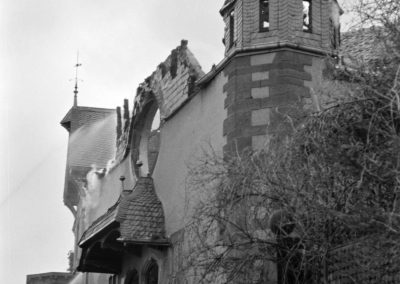 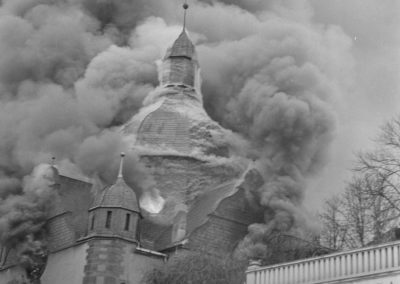 Compa­ra­tively late, around noon on November 10, the Siegen synagogue, too, fell victim to the flames. The new SS Haupt­sturm­führer in Siegen, the teacher Heinrich Lumpe, had obviously not known of a synagogue and was only made aware of it by a call from his superior. Imme­dia­tely, Lumpe assembled a group of ten to twelve SS and SA men, whom he ordered to wear civilian clothes. In broad daylight, they entered the building and built a pyre out of wooden benches, the harmonium, and the preaching podium. The fire quickly spread, and the apartment of the janitor’s family caught fire. The fire­figh­ters concen­trated on preven­ting the fire from spreading to the surroun­ding buildings. The numerous onlookers kept quiet; neither applause nor protest could be heard. Only a doctor from the neigh­bor­hood, whose patients included members of the Jewish community, shouted from the window, „What kind of a dirty job are you doing?“

Die Jüdische Gemeinde Siegen (1884–1943)
„On that night of 9 November 1938, ever­y­thing changed: the pogroms, orchestrated by the state and accepted by the public, ended what had always been a trou­ble­some coexis­tence for the Jews with the majority of the popu­la­tion in the German Reich. The anti-Semitism that had been state doctrine since 1933, which justified the social discri­mi­na­tion of the Jews, turned into perse­cu­tion that culmi­nated in exter­mi­na­tion. The ‚Reichs­kris­tall­nacht‘ was the beacon for all that was to come, it was the end of discri­mi­na­tion, it was the beginning of the Holocaust.“

The perpe­tra­tors then went to the Jüngst restau­rant to celebrate the „Juden­ak­tion“ in the SS’s regular pub. Six of them were charged in 1948 „with crimes against humanity and aggravated arson.“ The sentences were extremely lenient: Three men were acquitted, and three were sentenced to prison terms of a maximum of one year and two months, but these were shortened or even suspended. The justi­fi­ca­tion of the verdict said that the defen­dants had merely been „tools of others.“ „Their insight into the injustice of their deed“ had been „consider­ably impaired“ by the „propa­ganda which they had been exposed to for years.“ 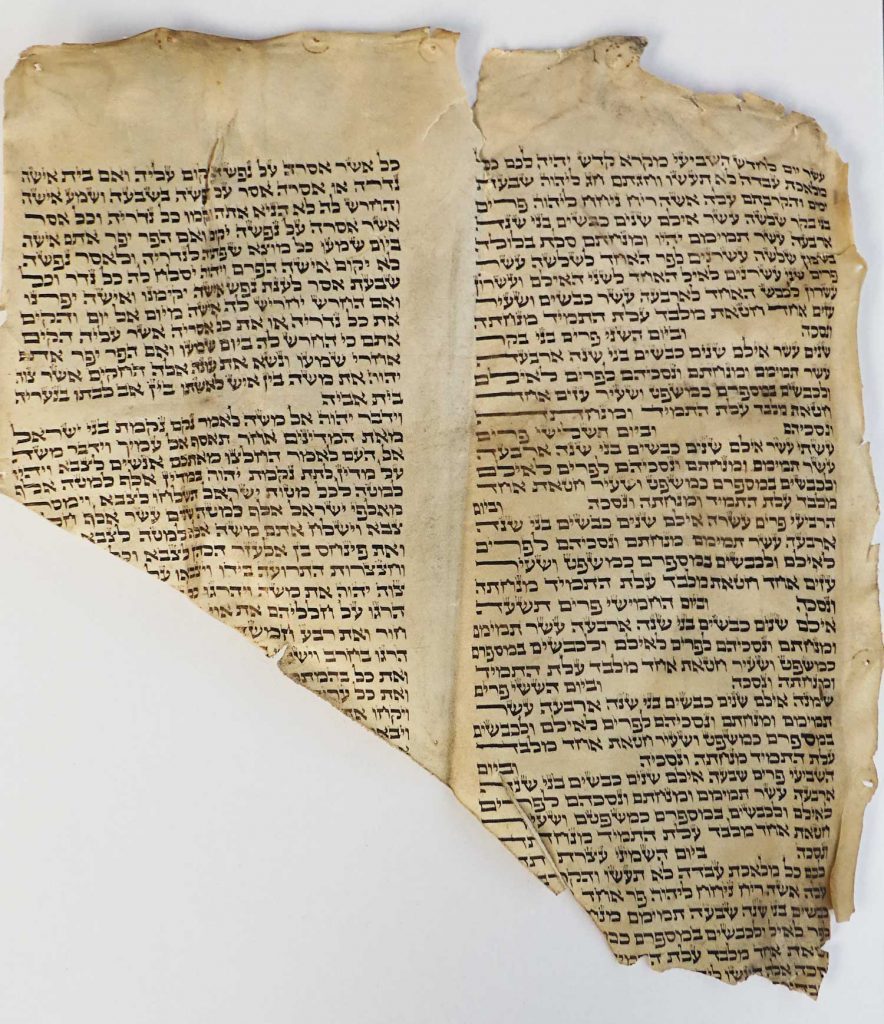 The fragment of the Torah scroll is one of the few things that remain from the Siegen Jewish Community. The piece of paper had been rescued from the debris by 14-year-old high school student Heinrich Kretzer. Heinrich Kretzer was one of the students from the city’s high school who were sent to the scene of the fire by their teachers to witness „the new era.“ Kretzer took the parchment, hid it under his sweater, carried it home, and pinned it in his closet: one must not forget what had happened, the student justified his courageous deed. Heinrich Kretzer died in October 1944 at the age of twenty as a Wehrmacht soldier.

Half a century later, his youngest brother Rolf remembered the fragment: In the summer of 1995, the Aktives Museum Südwestfalen (AMS) had called on the citizens of Siegen to search for things from the Nazi era. Rolf Kretzer gave the page to the museum, where it can be seen today.

After the Pogrom Night, the number of Jews who wanted to leave Germany increased rapidly. Around 130,000 – as many as in the entire previous five years – left their belon­gings behind and set off for an uncertain future. Those who could, also left the Sieger­land: by the time Jewish emigra­tion was banned on 23 October 1941, about forty percent of the Sieger­land Jews had left. Those who stayed behind were the old, the sick – and men who bore respon­si­bi­lity like Eduard Hermann, chairman of the Siegen Jewish Community since 1921. The small group of believers now met in his house for services. Hermann also had to conduct the nego­tia­tions with the Nazi autho­ri­ties, who demanded that the congre­ga­tion demolish the ruins and sell the property.

The congre­ga­tion had to bear the costs of the demo­li­tion, and the property was sold to the city of Siegen for far less than its value on 20 July 1940 – almost exactly 36 years to the day after the synagogue was dedicated. In 1941, the city built an air raid shelter on the property. There was to be nothing left to remind people that a synagogue had stood here.

For the Jews who remained in Germany, the situation became incre­asingly unbe­arable. From September 1941 onwards, they had to wear a yellow „Jewish star“, which prevented many from leaving the house for fear of being beaten up on the open street. In October 1941, the depor­ta­tions to the exter­mi­na­tion camps began. At least 160,000 German Jews were not to return.

As late as September 1944, Jewish women from the Sieger­land who were married to non-Jews or so-called half-breeds were deported to the Kassel-Betten­hausen concen­tra­tion camp, a subcamp of Buchenwald.

When Heinrich Marburger, a miner from Müsen born in Fischel­bach near Laasphe in 1887, learned of the destruc­tion of the Siegen synagogue, he said, „This is the end of the Nazis.“ In justi­fi­ca­tion, he quoted a verse from the book of the prophet Zechariah: „He who touches my people touches the apple of God’s eye.“ The city of Siegen was almost comple­tely destroyed on December 16, 1944, and in further Allied bombing raids. On May 8, 1945, Nazi Germany declared its uncon­di­tional surrender.