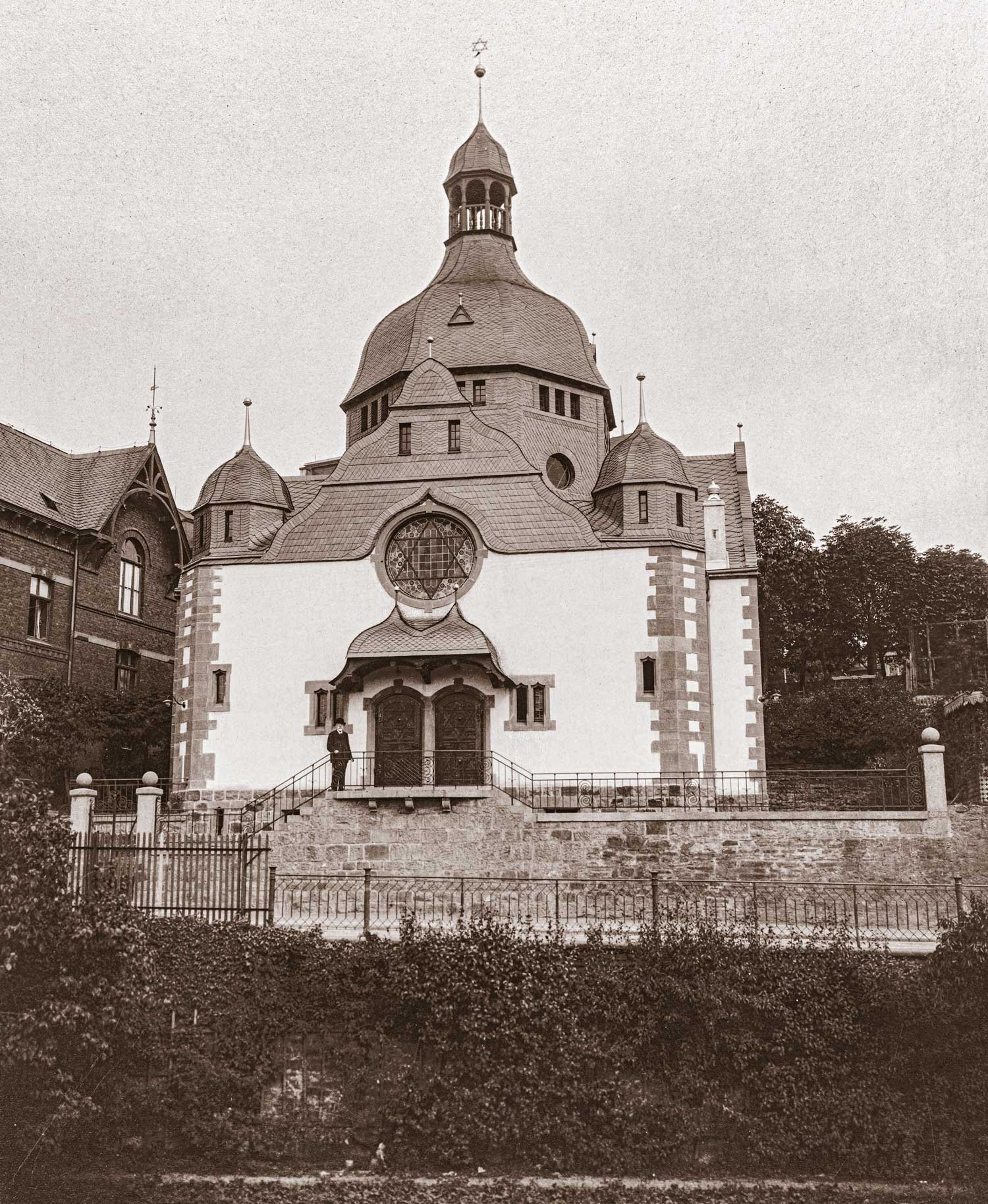 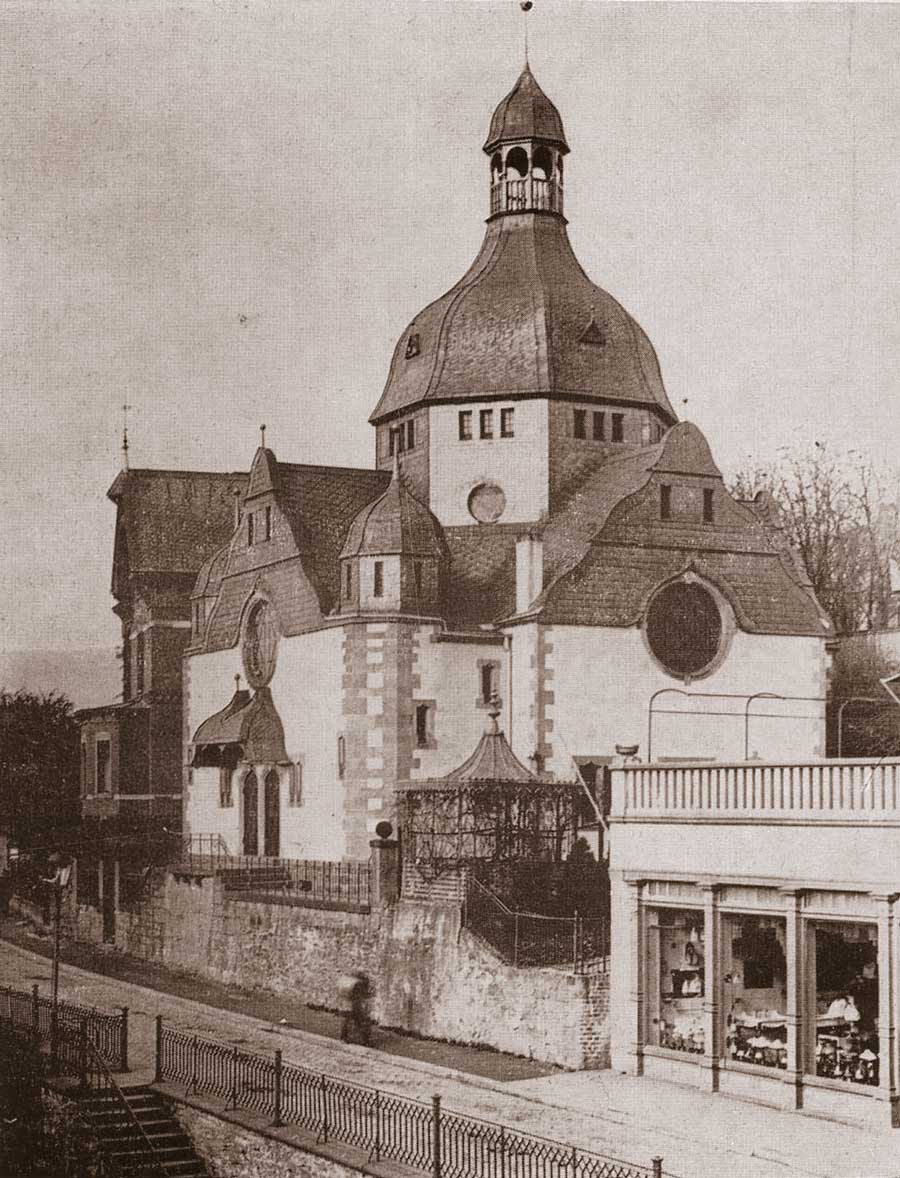 Designed by the renowned Berlin architect Eduard Fürstenau (1862–1938), the synagogue was designed according to the rules of moderate Orthodox Judaism: Women and men sat strictly separately – the space of worship had 90 seats for men downstairs and 70 seats for women in the gallery. At the same time, the room offered space for a choir and a harmonium, which was frowned upon in strict Orthodox congregations. The congregation lacked the money for an organ and a heating system, which was not installed until 1929. The building also contained a schoolroom, a ritual bath, storage and changing rooms, toilets, and a janitor’s apartment.

Fürstenau was responsible for the construction of two other synagogues in Dortmund and Bielefeld around the same time, which were inaugurated in 1900 and 1905, respectively. They were incomparably larger than the ones in Siegen – nevertheless, the three are referred to as „sister synagogues.“

When the foun­da­tion stone for the Siegen synagogue was laid on July 23, 1903, the event attracted attention throug­hout German Jewry: the Allge­meine Zeitung des Judentums, published in Berlin, paid tribute to the „solemn act“ with a detailed article in its July 31 issue. The reporter referred to the special situation of the Siegen community, for it was located in „the main town in Stöcker’s consti­tuency, where Jewry has enough to fight against preju­dices and miscon­cep­tions anyway.“ Thus, it must be „parti­cu­larly concerned (…) to appear dignified to the outside world as well.“

The document for the laying of the foun­da­tion stone was written by Simon Grünewald. Among other things, it contains an outline of the history of the Siegen Jews since 1815. In addition to the document, the statutes for the synagogue congre­ga­tion and the Israelite Women’s Asso­cia­tion as well as the cemetery regu­la­tions for the Jewish burial ground were also walled in a cassette.
The Jewish Community of Siegen (1884–1943) 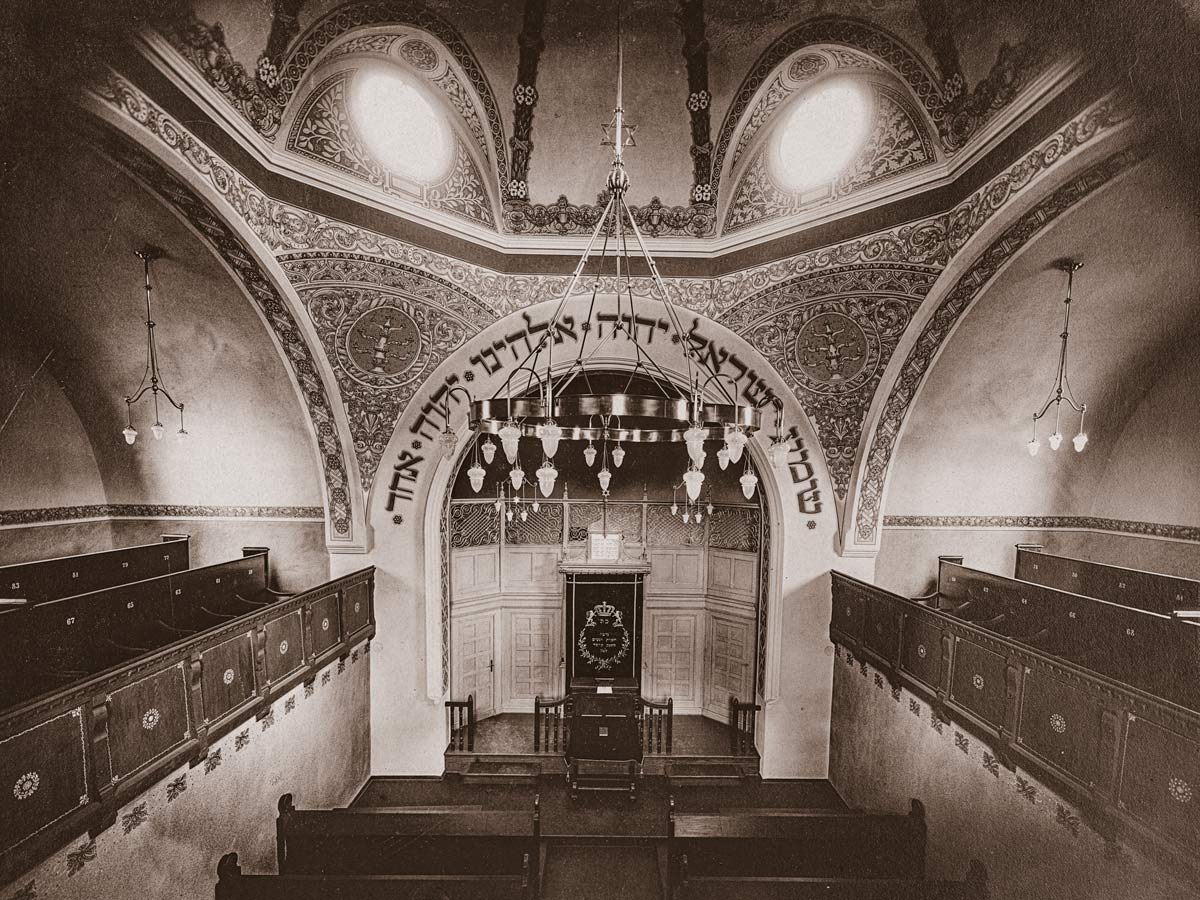 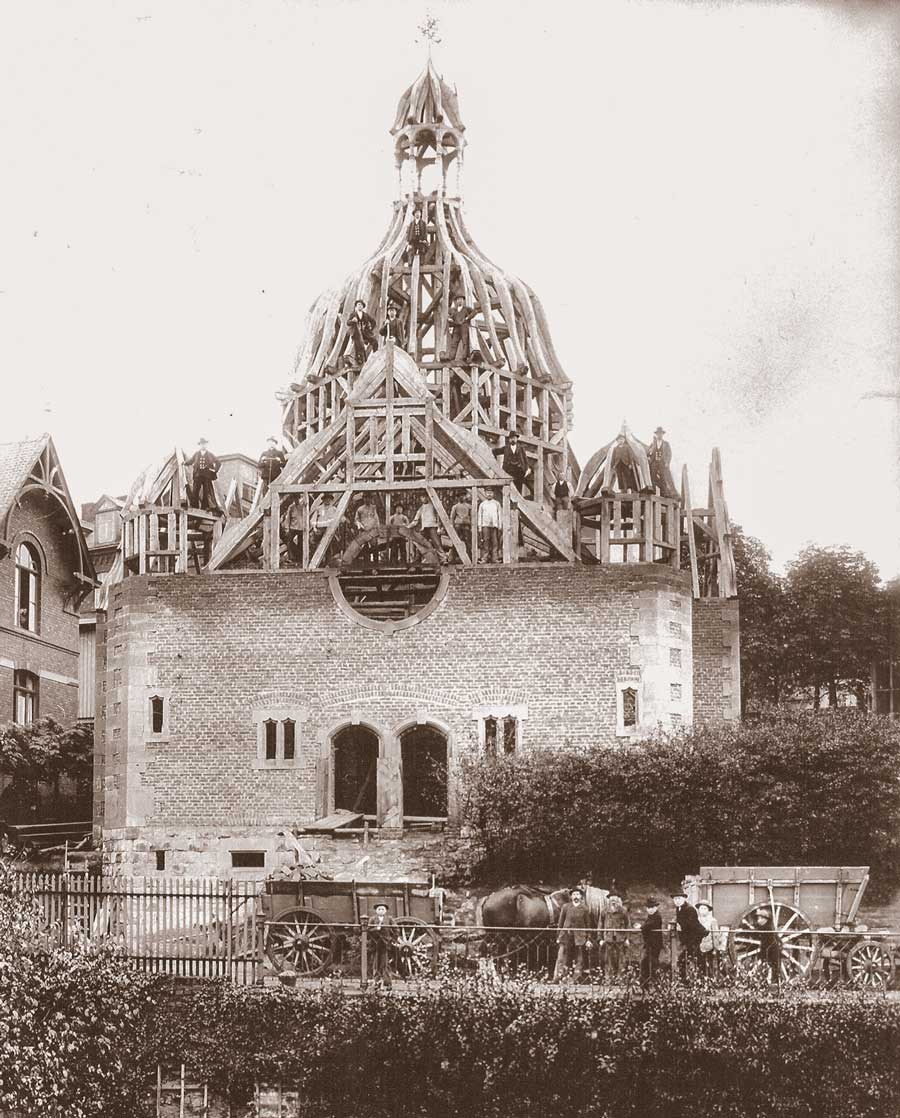 The construction work progressed quickly so that the Richtfest (topping-out ceremony) could already be celebrated on October 15, 1903. The Siegener Zeitung was impressed by the „building with its pleasing forms“: it did not „change the image of the eastern part of our city to its disadvantage. “

The Allge­meine Zeitung des Judentums also reported on the „uplifting cele­bra­tion“ of the dedi­ca­tion of the synagogue on July 22, 1904. However, in the list of guests of honor, which included the district admi­nis­trator, the district commander, the member of the state parlia­ment, and the master craftsmen involved in the cons­truc­tion, the names of the pastors were missing: „The clergymen of both deno­mi­na­tions, who had received invi­ta­tions, had not responded.“ In addition to the Protes­tant and Catholic pastors, the mayor of the city of Siegen was also absent. The absence of the head of the city and the repre­sen­ta­tives of Chris­tia­nity was unusual: in other cities where synago­gues were inau­gu­rated during the Empire, civic and Christian commu­ni­ties were represented. 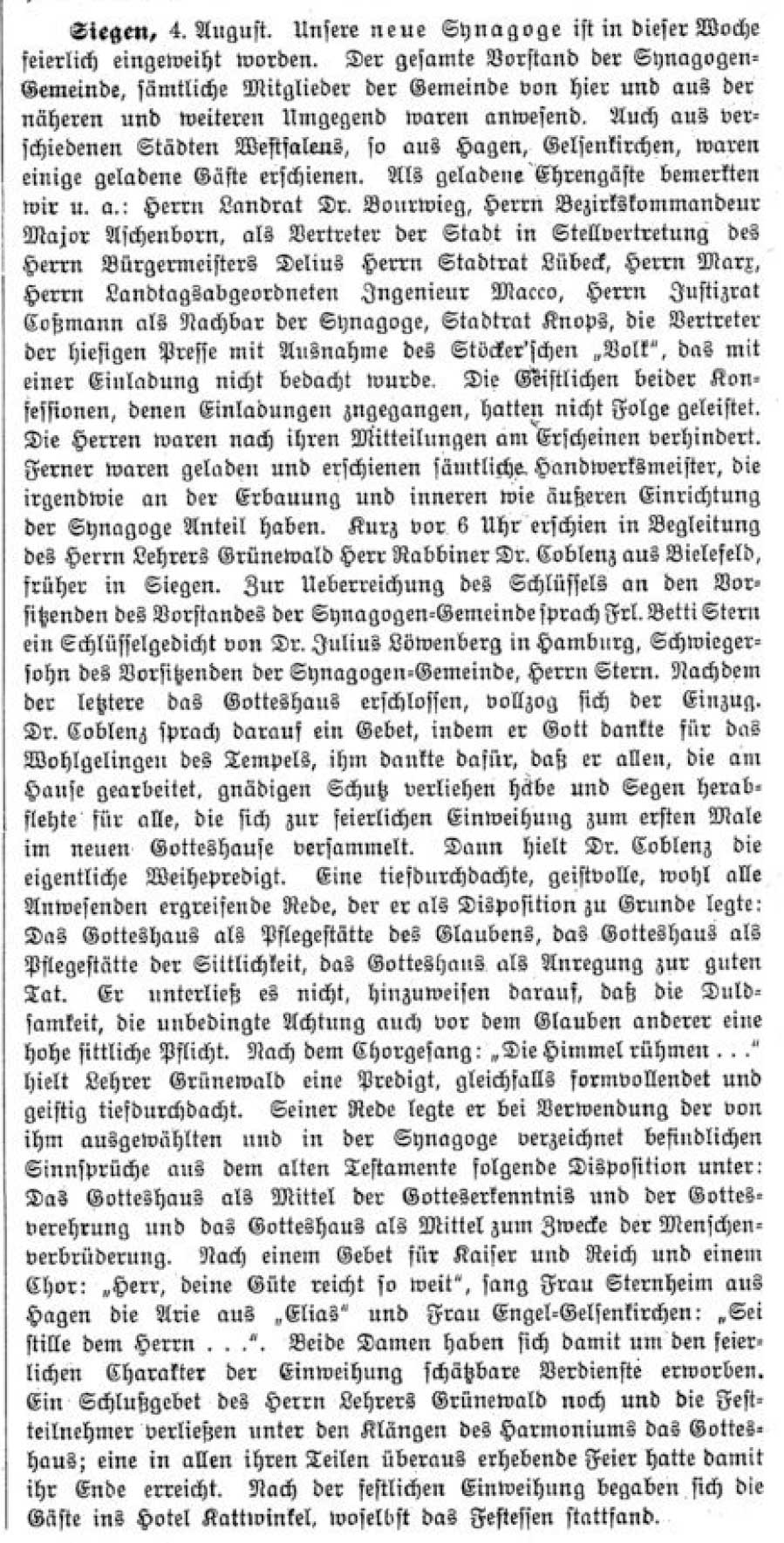 Reichs­po­grom­nacht
The local builder of the synagogue was the Siegen architect Hermann Giesler (1865–1941). His sons Paul (1895–1945) and Hermann (1898–1987), who also became archi­tects, joined the National Socialist movement early on and took high ranks in the SA. Both brothers were among the leading elite in the Nazi state: Paul, among other things, as Gauleiter of West­phalia-South and as Bavarian Minister President, Hermann as a confidant of Hitler. After the fall of Nazi Germany, Paul evaded his respon­si­bi­lity by commit­ting suicide. Hermann was sentenced to life impri­son­ment by a U.S. military court in 1947 for homicide, but was released from prison as early as 1952. He remained a convinced National Socialist until his death in 1987.
The virtual recon­s­truc­tion of the Siegen synagogue

„The clergy of both deno­mi­na­tions, who had received invi­ta­tions, had not responded.“