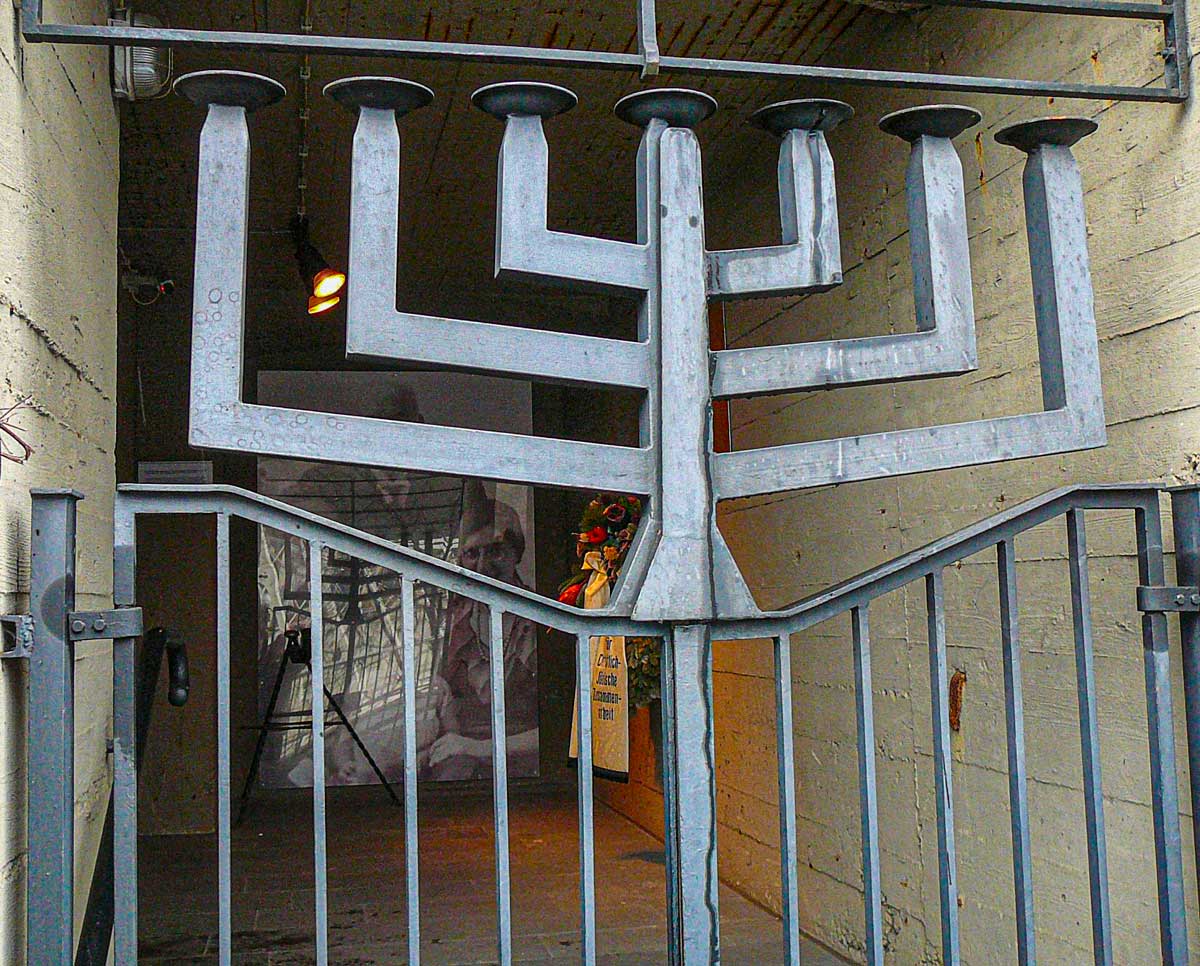 In 1978, to mark the 40th anniversary of the pogrom night, a wrought-iron gate was installed at the entrance to the bunker, which shows a seven-branched candelabrum (menorah). The design of the menorah, which is one of the central symbols of Judaism, can be traced back to Klaus Dietermann (1949–2017), among others. Dietermann, who saved the fates of the Siegerland Jews from oblivion in numerous publications, was the founder and long-time chairman of the Aktives Museum Südwestfalen as well as the managing director of the Society for Christian-Jewish Cooperation Siegerland.

Siegen is mentioned in documents for the first time as „Sigena“.

Siegen is called „civitas“ (city) on a coin.

In a treaty between the Arch­bi­shop of Cologne and the local Count of Nassau, Jews in Siegen are mentioned in a document for the first time.

Benjamin Moses acquires a plot of land in the exclave of Burg­hol­ding­hausen and receives permis­sion to build a house. He is the first Jew mentioned by name in Siegerland.

With the merchant Isaac Rosenberg, a Jew is mentioned by name in Siegen for the first time.

Isaac Rosenberg is the first Jew to be granted citi­zen­ship of the city of Siegen after three decades of disputes with the municipal authorities.

A second Jew, Isaac Lenneberg, is granted citi­zen­ship in Siegen.

After having left or emigrated to America, no Jews are regis­tered in the city of Siegen.

The Sieger­land region is connected to the rail network with the opening of the Hagen-Siegen and Cologne-Siegen lines. The remote area now becomes more easily acces­sible and expe­ri­ences a boost in economic and social modernization.

Jewish merchant and trader families move from the neigh­boring regions of the Sauerland and Witt­gen­stein to the growing indus­trial city of Siegen. Seven families are recorded in 1870, including the merchant Meier Leser Stern’s family. Stern is the central figure of the Siegen Jewish community until his death in 1924.

The Siegen Jews acquire a plot of land on the Linden­berg for a cemetery and establish a private religious school, which was reco­gnized by the state in 1885.

The Berlin court preacher Adolf Stoecker, one of the leading figures of the anti-Semitic movement, delivers a program­matic speech in the Siegen Hammer­hütte. From 1881 to 1893 and from 1898 to 1908, he repres­ents the consti­tuency of Siegen-Witt­gen­stein-Bieden­kopf in the Reichstag. The Sieger­land becomes a strong­hold of hostility towards Jews.

The teacher Felix Coblenz (1863–1923) begins his service in Siegen and receives „the conces­sion to open a private Israelite school in Siegen.“

In March, the Siegen synagogue community is founded. One year later, 127 Jews are regis­tered in Siegen and 107 in the district area, but most maintain only loose contacts with the Siegen community.

Meyer Lili­en­feld (1866–1908) succeeds Felix Coblenz as a teacher and cultural official of the Jewish community of Siegen. He worked in the city until 1897.

On March 25, the Jewish community’s chairman, Meier Leser Stern, acquires a plot of land „aufm Ober­graben“ for the cons­truc­tion of a synagogue.

Simon Grünewald (1870–1939) is appointed the third and last teacher, preacher, and cantor of the Siegen synagogue community. After the closure of the Jewish school, he was a teacher at the Protes­tant city school in Siegen until his reti­re­ment in 1930. He was active for the community until his flight in June 1939. Grünewald is, next to Meier Leser Stern, the second central perso­na­lity of the Sieger­land Jewish community.

On September 24, Meier Leser Stern submits the appli­ca­tion for a building permit for a synagogue to the district govern­ment in Arnsberg. On December 9, he hands in the design sketch of the Prussian govern­ment and building councilor Eduard Fürstenau.

On July 23, the foun­da­tion stone for the Siegen synagogue is laid. Already on October 16, the Richtfest (topping-out ceremony) can be celebrated.

The Siegen synagogue is offi­ci­ally inau­gu­rated on July 22 with a ceremony that attracts national attention. However, unlike in other cities, neither the mayor nor the clergymen of the Protes­tant and Catholic churches came to the dedi­ca­tion ceremony.

The Jewish community estab­lishes a burial ground in the municipal Hermels­bach cemetery.

32 Jewish men from the Sieger­land fight for the German Empire in World War I, eight of them die on the battlefields.

As ever­y­where else, the anti-Jewish slogan „Ever­y­where her face is grinning, except in the trenches“ can be read and heard in the Sieger­land. Teacher Grünewald addressed the public with a protest note in the Siegener Zeitung on January 27, 1919.

At the beginning of June, the night before the unveiling of a memorial plaque for the Jewish victims of the war, the synagogue is smeared with anti-Semitic slogans.

Meier Leser Stern, the founding chairman and honorary chairman of the Siegen synagogue community since 1921, dies on October 15 at the age of 90.

In the last free elections in November 1932, the NSDAP receives 56.1 percent of the vote in Sieger­land – the average in the German Reich is 33.1 percent.

Around noon on November 10, Siegen SA and SS men set fire to the Siegen synagogue. A large number of onlookers behave apathe­ti­cally. The men of the Siegen Jewish community are arrested and deported to the Sach­sen­hausen concen­tra­tion camp – many of them will not recover from the abuse after their release.

The last of the 24 Jewish companies and busi­nesses in Siegen is „Aryanized“ and taken over by mostly Siegen busi­nessmen at a bargain price.

After the Siegen Jews had to pay the costs of demo­li­shing the ruins of their synagogue, they also have to sell the property far below its value. Almost exactly 36 years to the day after the synagogue’s dedi­ca­tion – on July 20, 1940 – the city of Siegen acquires the property and builds an air raid shelter there.

Until the ban on Jewish emigra­tion on October 23, 1941, about forty percent of the Jews of Sieger­land leave their homeland.

On March 10, the Society for Christian-Jewish Coope­ra­tion Sieger­land e.V. is founded in Siegen. Hugo Herrmann (1898–1993), the only Jew from Siegen to settle in Siegen again for a longer period after the Shoah, is elected executive chairman.

On November 9, the Reichs­po­grom­nacht (Night of Broken Glass) of 1938 is comme­mo­rated for the first time at the site of the destroyed Siegen synagogue. A comme­mo­ra­tive plaque is placed on the outer wall of the Hochbunker.

On November 10, the memorial and learning site of the Aktives Museum Südwest­falen (Active Museum of South West­phalia) was opened in the Hoch­bunker on the former site of the synagogue.

The Society for Christian-Jewish Coope­ra­tion Sieger­land is parti­ci­pa­ting in the anni­ver­sary year „1700 years of Jewish life in Germany“ with a major event: On November 9, the multi­media presen­ta­tion „Virtual Recon­s­truc­tion of the Siegen Synagogue“ will be shown on the outside wall of the bunker.