The virtual reconstruction
of the Great Synagogue Warsaw 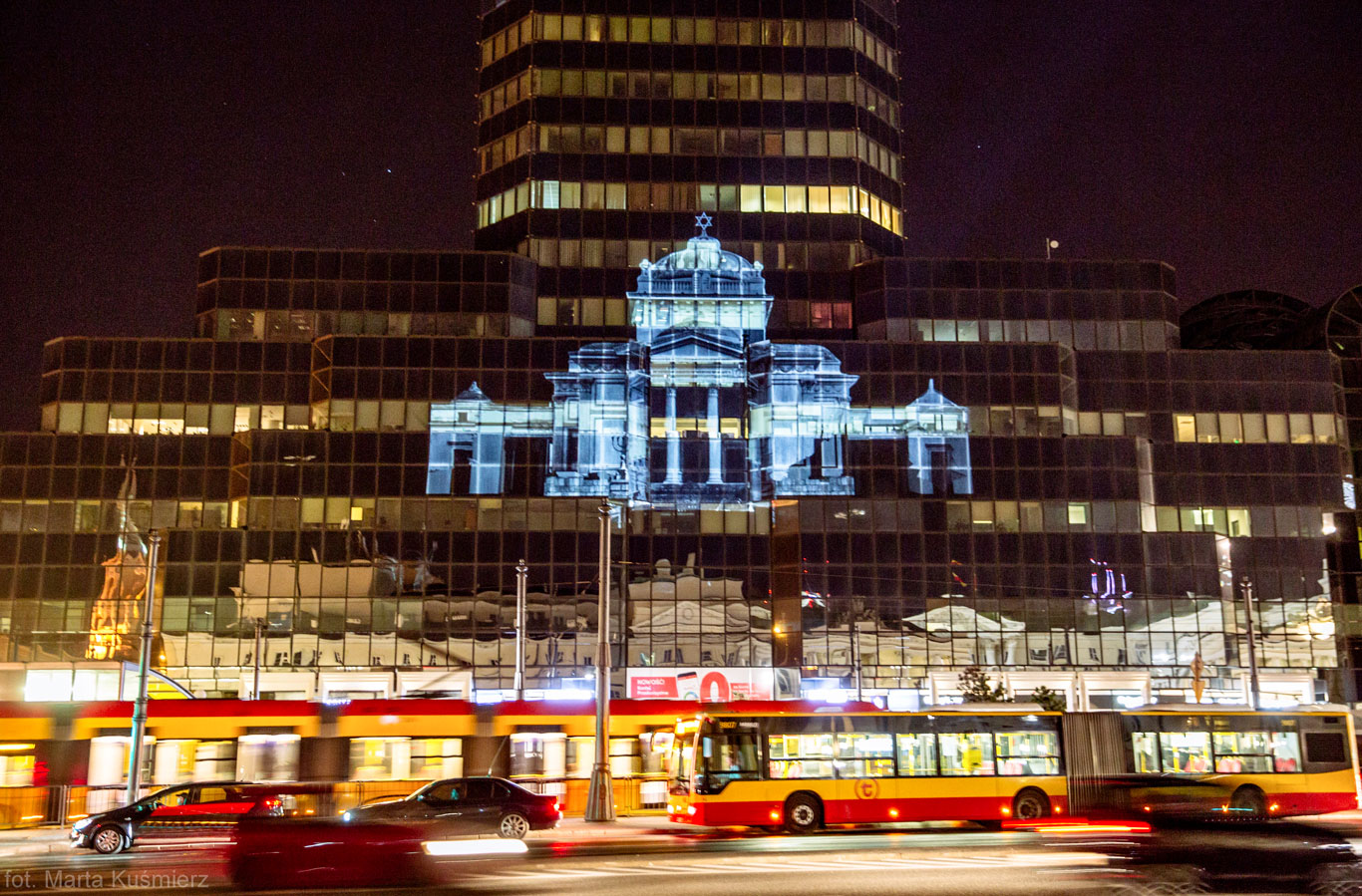 The photo shows the virtual reconstruction of the Great Synagogue of Warsaw, which was demolished on May 16, 1943, on the orders of SS General Jürgen Stroop. On its former site now stands a financial high-rise, on whose outer facade the video installation was projected. 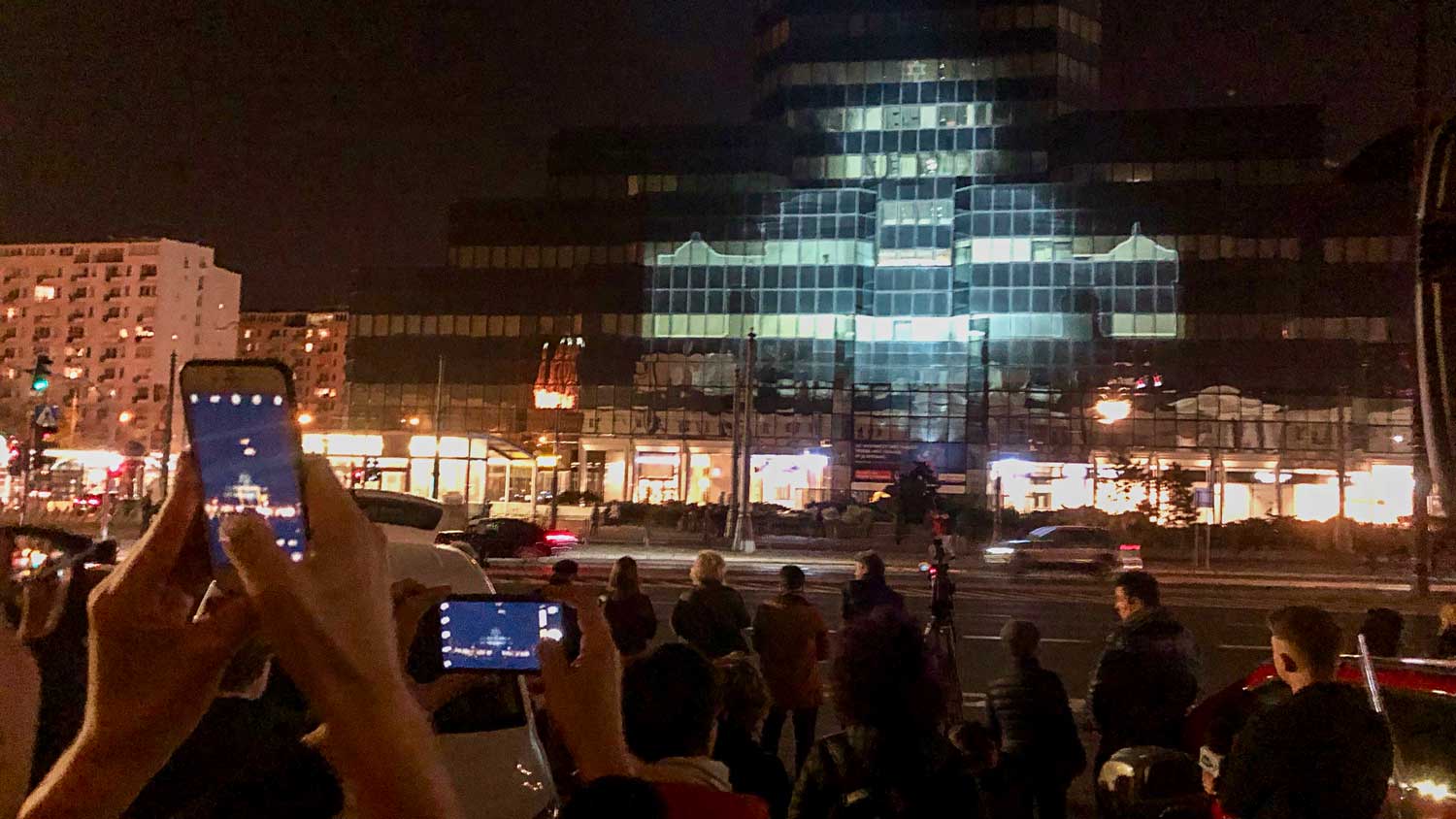 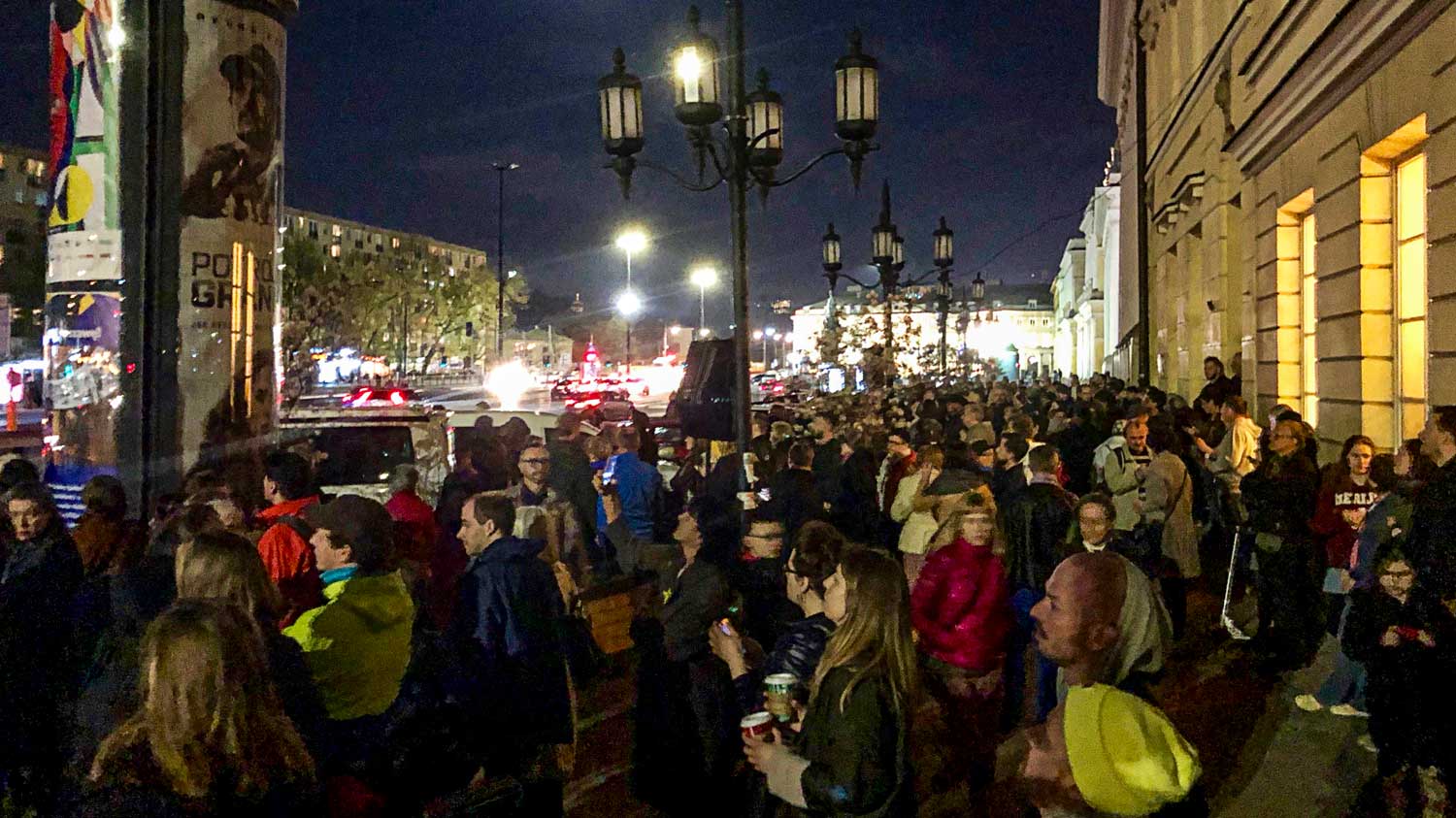 The multimedia installations marking the anniversaries of the Warsaw Ghetto Uprising on April 19, 2018, and April 18, 2019, and – due to the pandemic – on September 26, 2020, were viewed by up to 7,000 visitors on-site and several thousand worldwide via live stream.

At the center of the open-air event in Siegen is the video instal­la­tion with the virtual recon­s­truc­tion of the Siegen Synagogue. This instal­la­tion will alternate on the wall of the Hoch­bunker with the video instal­la­tion for the Great Synagogue Warsaw. Why two instal­la­tions? On the one hand, this is to show the connec­tion between German and Polish Judaism; and on the other hand, because Warsaw has become a double symbol: It stands – next to Auschwitz – for the exter­mi­na­tion of European Judaism by the Germans and at the same time for Jewish resis­tance against the National Socialist terror. 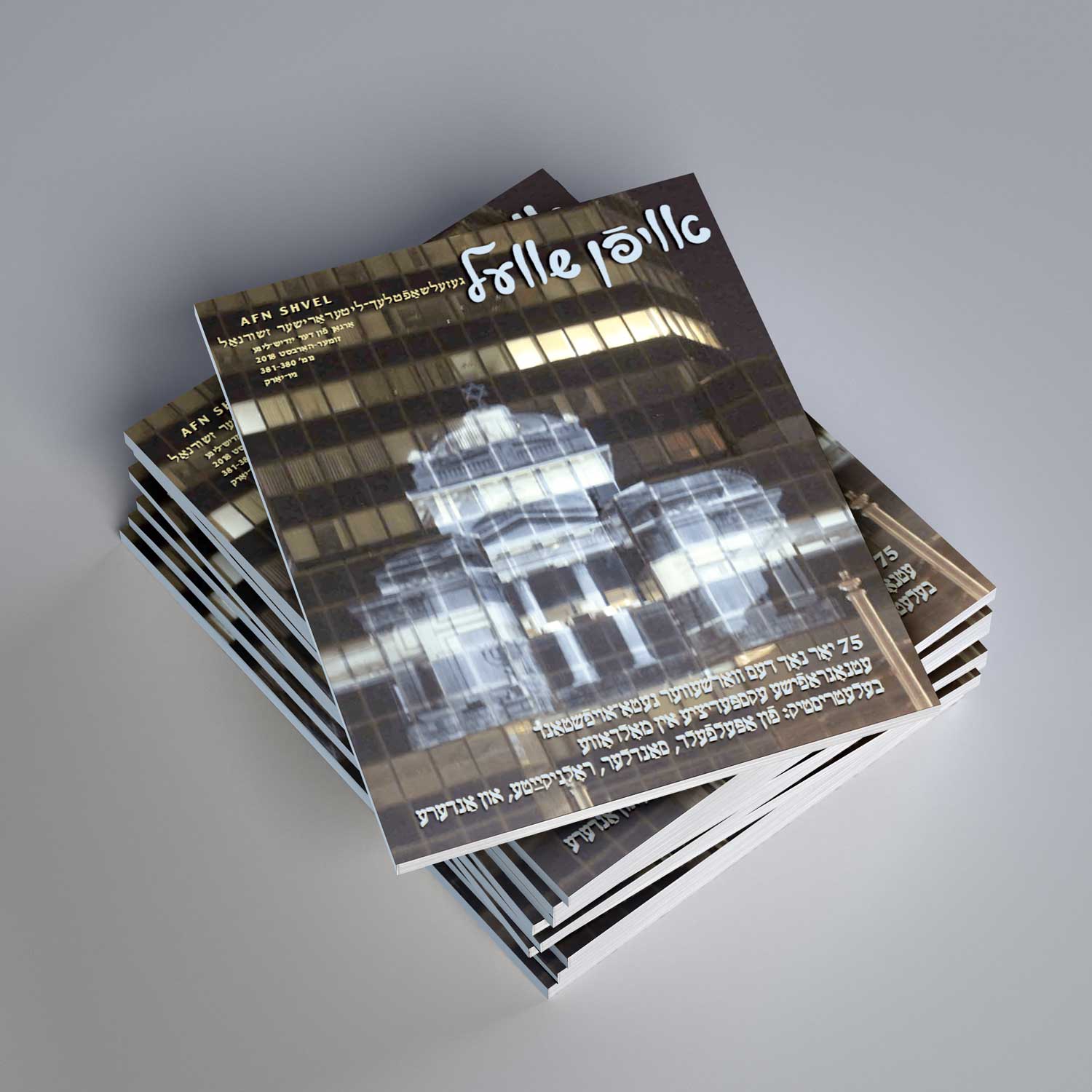 The virtual reconstruction of the Great Synagogue of Warsaw received worldwide attention and generated international media coverage. The photo shows the cover of Afn Shvel, a social-literary journal published in Yiddish in New York (July 2018 issue).

German and Polish Jews look back on almost a thousand years of shared history. It began after the Crusades at the end of the 11th century, and espe­ci­ally after the plague pogroms in 1350, when Judaism was largely elimi­nated in German terri­to­ries. Survivors of the pogroms moved to the Kingdom of Poland, where they were welcomed with open arms. They took with them their language, Yiddish, which had developed around the year 1000 in the Jewish commu­ni­ties of the Rhine region. Over the centuries, several migra­tions in the opposite direction occurred: Hundreds of thousands of Polish Jews moved to Germany, some of them to Siegen after the First World War. Jewish life in Germany is incon­ceivable without Polish Jews: Poli­ti­cian Rosa Luxemburg (1871–1919), philo­so­pher Martin Buber (1878–1965), literary critic Marcel Reich-Ranicki (1920–2013), and many more were formative for Jewish life in Germany. After World War II, two-thirds of the appro­xi­m­ately 20,000 Jews living in Germany had been born in Poland.

Until Germany invaded Poland in September 1939, Warsaw was one of the centers of European Judaism. In 1939, nearly 370,000 Jews lived in the Polish capital, almost a third of the city’s popu­la­tion – more than in any other city in Europe. In November 1940, the German occupiers estab­lished the Warsaw Ghetto, where they confined up to 450,000 women, men, and children to cramped quarters in inhumane condi­tions before deporting and murdering the inha­bi­tants in the death camps; among them many German Jews. On April 19, 1943, primarily young Jewish women and men defied the depor­ta­tion orders and rose up against the occupiers. Although inade­qua­tely armed, the Jewish fighting units fiercely resisted for weeks before the uprising was crushed. Only a few of the appro­xi­m­ately 750 active fighters survived the Shoah.

For the 75th anni­ver­sary of the Warsaw Ghetto Uprising on April 19, 2018, Gabriela von Seltmann developed a multi­media project that attracted thousands of visitors on-site and caused a worldwide sensation: On the facade of a financial high-rise, she resur­rected the Great Synagogue with a three-dimen­sional video instal­la­tion. Built in 1878, the landmark of Warsaw’s once flou­ris­hing Jewish life had been destroyed on May 16, 1943, on the orders of SS General Jürgen Stroop. What had begun with the destruc­tion of the German synago­gues on November 9/10, 1938, seemed to have come to an end with the demo­li­tion of the Great Synagogue of Warsaw. Stroop cele­brated the destruc­tion as an „unfor­gettable allegory of the triumph over Judaism.“

The video instal­la­tion thus serves ulti­m­ately not to leave the last word to Hitler and Stroop – and thus to hatred, death, and destruc­tion – but to declare publicly and empha­ti­cally: Judaism lives! We Jews live – and we do not hide, but show ourselves in public! And the Yiddish language, which three million Polish Jews spoke before the Shoah, is also alive!

The sound­track of the video instal­la­tion features an original histo­rical recording of the cantor of the Great Synagogue, Gershon Sirota (1874–1943). Sirota was murdered at the beginning of the Warsaw Ghetto Uprising on April 19, 1943. A day later, Michał Klepfisz, a member of the Jewish Fighting Orga­niza­tion and friend of the leader of the ghetto uprising, Marek Edelman (1919–2009), was shot. Michał Klepfisz’s daughter Irena, born in the Warsaw Ghetto in 1941, is featured with an excerpt from her Yiddish-English poem Bashert. The poet survived the Shoah with forged papers in a Catholic orphanage. With her mother, who had also survived with forged documents, she came to New York in 1950, after four years in Sweden. A Polish trans­la­tion of the verses will be read by Paula Sawicka, Marek Edelman’s close friend and co-author of the book Love in the Ghetto (Schöff­ling-Verlag, 2013), which has also been trans­lated into German.

The virtual recon­s­truc­tion of the Siegen synagogue

Excerpt from the poem „bashert“ by Irena Klepfisz